A group of dancers submit themselves to an audition and quickly understand the situation. They are in the final round of selection. The non successive numbers suggest that many have been eliminated along the way. The final objective is to obtain a place in the chorus or ensemble, as they say nowadays. That is, the group of dancers who accompany the protagonists in a musical. 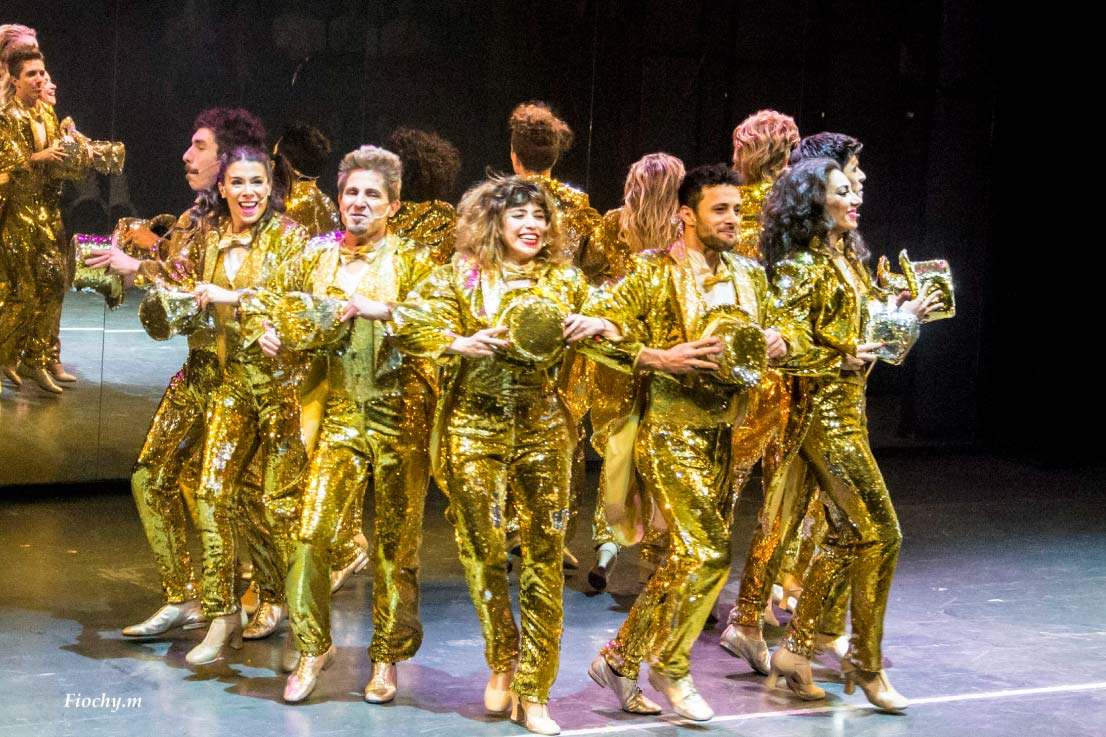 A Chorus Line is built on the shift from a number to a name. From anonymity to personal stories, unique and unrepeatable.
Two combined elements result in very meaningful instances: the mirror and the white line on the floor, the multiplication and the limit. The classic musical constantly oscillates between two extremes and in that oscillation builds its system. Each one must shine on their own to become a part of the whole. One by one they must respond in a personal presentation which exceeds they way in which they dance. In a short time they show their differentiating features. How do you make one seen and make the rest disappear for a moment? Generally by using two methods, one nearly metaphorical, a step forward with respect to the line and the other through the lighting. Though there are two characters who do not follow this structure and that gives them a certain protagonism.
The Choreographer, in the show and real life, Gustavo Wons, organizes, marks and accompanies with precision and beauty. The one who chooses – here in the flesh the talented Marti Ruiz – occupies the physical space of a spectator; it takes his point of view. The public shares this role, although they have no say. Observe with him the proud ones, the shy ones, those who take on the world and those who are taken by it. Nearly all of the love dancing. And then other things come into play, those which tilt the balance, the need to work, leaving frustration behind, proving something to oneself, each one with their own story.
A Chorus Line moves between the test and the achievement, the individual and the collective, failure and success, dreams and their fulfillment or not. For this to work a well oiled machine which seems as if its not, is necessary: that someone messes up and turns early or after, a hat falls, some takes a step late. It is Ricky Pashkus’s direction which sustains the whole system for it to work to perfection. Although they are fictionaly tested in dance, they are deeply moving in their acting. It’s a complex actoral challenge as they must act in a stripped away form, nearly without a framework, something which also mark a theme in the musical: It is not easy to talk about one, ones past, what does it mean to present oneself without acting, or how does one act without it seeming as if they are?
Laura Conforte sustains her character with strength and an incredible tenderness and is seen shining in all her work. Marcelo Cuervo, who designed the lighting, made a significant decision when putting the lights in the hall to reflect in the mirrors because it creates a space which fully framed.
Everyone does a great job, besides the aforementioned, Mariú Fernández, Nicolas Di Pace, Sofía Pachano and Menelik Cambiaso stand out; sometimes the roles collaborate and other times they squeezed everything they could out of their respective roles. And thank you to the careful work of Marcelo Kotliar, only the foreign names stray us from out native language.
The moment of the decision arrives and some stay while others go. But when they show closes, absolutely everyone shines equally magnificently illuminated, dancing in unison, with an orchestra small in number which, nevertheless, sounds massive. A true celebration of the musical in Buenos Aires. Monica Berman.